The flag of Wisconsin consists of the Wisconsin state coat of arms on a dark blue background. The flag was first designed in 1863 at the request of Civil War regiments who wanted an official flag to fly during the war on the battlefield. The flag was later revised several times to add more distinctive features. The current flag was adopted in 1913, and the name “Wisconsin” and the date of statehood, “1848,” were added in 1979, as many believed the old design was too similar to that of the flag of the State of New York. 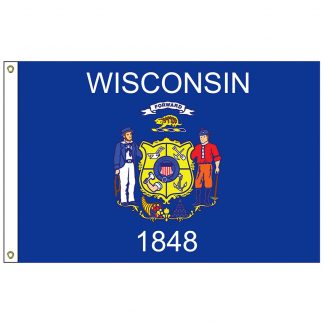