The flag of Tennessee consists of three stars in a circle on a field of red, with a strip of blue on the fly. The flag was designed by a soldier named LeRoy Reeves of the Third Regiment, Tennessee Infantry. The Tennessee State Legislature officially adopted the flag on April 17, 1905. The three stars represent the three main geographical divisions of the state, East Tennessee, Middle Tennessee, and West Tennessee. The blue circle around the stars represents the unity of the three “Grand Divisions” in one state. The blue bar was purely a design consideration. In the words of Reeves, “The final blue bar relieves the sameness of the crimson field and prevents the flag from showing too much crimson when hanging limp.” Some have stated, however, that the blue bar represents the Tennessee River. An article in National Geographic magazine on the Tennessee flag published in October 1917 erroneously reported that the stars represent Tennessee’s status as the third state to enter the United States after the original 13. But Reeves’ original description contradicts this interpretation: “The three stars are of pure white, representing the three Grand Divisions of the state.” 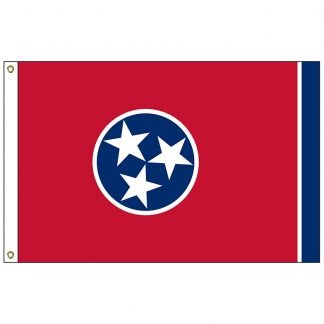