The flag of South Carolina is believed to have been originally designed in 1775 for use by South Carolinian troops during the American Revolutionary War. The blue of the flag was borrowed from the militia’s uniforms and the crescent from the emblem on their caps. However, elements that compose the current flag were seen in as far back as 1765, in a banner used by South Carolina protesters of the Stamp Act. The current version was adopted on 28 January 1861 as the “national” flag of the newly seceded state. The only change was the addition of the palmetto tree, which represents the defense of Fort Moultrie (constructed of palmetto logs) on Sullivan’s Island from British attack in June 1776. The flag remained the official state flag after the end of the American Civil War. The most misunderstood piece of symbolism on the South Carolina flag is its crescent, or what is sometimes referred to as the “New Moon”. This emblem actually has nothing at all to do with a crescent moon. The crescent worn on the caps of the South Carolina revolutionary soldiers was a stylized criniere or gorget. Thus, both symbols on the state flag are emblems of defensive prowess. 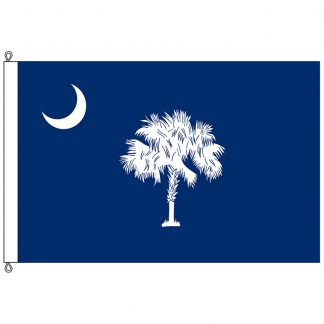