The flag of Rhode Island is white and consists of a gold anchor in the center (a symbol for hope) surrounded by thirteen gold stars (for the original 13 colonies and Rhode Island’s status as the 13th state to ratify the Constitution). A blue ribbon below the anchor bears the state’s motto in gold: “HOPE.” The flag of the State of Rhode Island as it presently exists was formally adopted in 1897. It is frequently depicted with golden braid around the three free (i.e., non-hoist) edges. 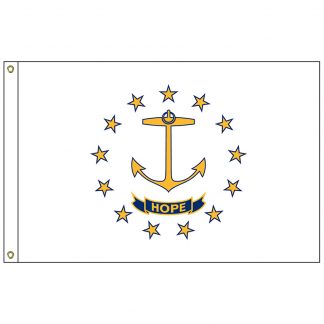