The design for the flag of North Dakota is an almost exact copy of the unit banner carried by the state’s troop contingent in the Philippine-American War. It was adopted by the North Dakota legislature on March 3, 1911, although the color was not precisely specified at that time. Legislation in 1943 brought the flag in line with the original troop banner, which is on display at the North Dakota Heritage Center in Bismarck. Interpretations of the flag are as diverse as there are makers of it; the complicated design precludes standardization. The design is typically screen-printed on rayon for mass production; very few if any are embroidered. The flag’s official proportions are 33:26, significantly shorter than other flags; however in practice the flag is produced and sold in 5:3 ratios. 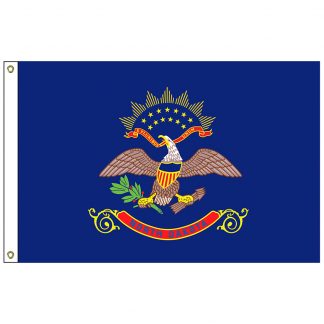