The flag of Oregon is a blue field on which are placed, on the obverse, the Seal of Oregon (supported by thirty-three stars, representing its order in joining the United States); the words “STATE OF OREGON” above; and the year of statehood, 1859, below. On the reverse is placed a figure of a beaver, the state animal. The ratio of the flag’s height to length is 3:5. It is generally rare for any flag to have differing symbolism on its two sides, and such designs are considerably more expensive to manufacture. Only one national flag, the flag of Paraguay, has a differing obverse and reverse. The Oregon flag is the only current state flag in the United States that has this characteristic. Due to the flag having a double-sided seal, the overall weight will be heavier than a normal flag. 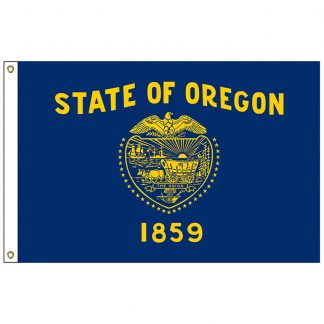