The flag of Idaho consists of the state seal on a field of blue. The words “State of Idaho” appear in gold letters on a red and gold band below the seal. According to the official description of the flag, there should also be a fringe of gold around the edges, but many versions of the flag do not include this detail. The seal, in the center of the flag, depicts a miner and a woman representing equality, liberty and justice. The symbols on the seal represent some of Idaho’s natural resources: mining, forests, farmland, and wildlife. The flag was based on a design of a flag carried by the First Idaho Infantry in 1899 during the Spanish-American War. The flag was adopted on March 12, 1907 and slightly modified in 1957. 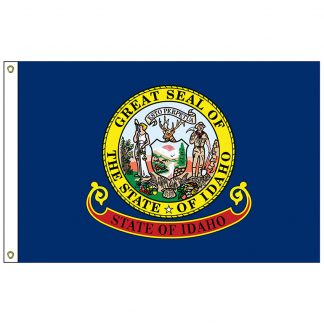