Nylon outdoor Fleur-de-lis flag. Expertly crafted using heavyweight bunting material of 100% acid-dyed nylon. All seams are double-stitched and fly ends have 4 rows of stitching for added durability. Finished with heavy-duty, no shrink white header material for the strongest headers in the industry. These nylon flags offer lustrous beauty, superior wear plus excellent flyability even in the slightest breeze.

This flag was used from 1400 until 1590. The most important flag carried by explorers and settlers was most likely the royal flag, since this was a symbol of the authority of the king in the new lands. In the early sixteenth century the French royal flag was blue with three gold fleurs-de-lis representing directly the shield in the royal French coat of arms. It is not likely that the French explorers Verrazano or Cartier actually raised this flag on land. At the time the practice of placing a permanent marker was preferred. Fleur-de-lis translates to “Flower of the Lily”. 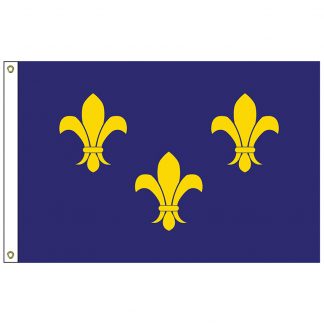