The flag of Ukraine is a banner of two equally sized horizontal bands of blue and yellow; a combination of two colors where the top represents the sky and the yellow represents the wheat. It was officially adopted as a state flag for the first time in 1918 by the short-lived West Ukrainian People’s Republic and subsequently used by the Ukrainian People’s Republic. When Ukraine was part of the Soviet Union, the flag was outlawed and, before 1949, there was no official state flag until adoption of the red-azure flag of the Ukrainian SSR. The blue and yellow flag was provisionally adopted for official ceremonies in September 1991 following Ukrainian independence, before finally officially being restored on January 28, 1992 by the parliament of Ukraine. Please, also see our full line of flag sizes, from small stick flags to large 6′ x 10′ flags. Hardware is not included. Prop-65 compliant. 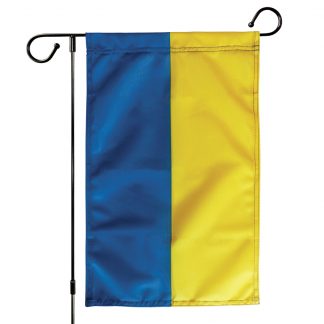