The flag of Virginia consists of the state seal on a background of blue. The current version of the flag was adopted at the beginning of the American Civil War in 1861. The Latin motto, “Sic semper tyrannis”, at the bottom of the state seal means “Thus Always to Tyrants”. This quote is attributed to Brutus during the assassination of Julius Caesar in Rome. The woman is “Virtus the genius of the Commonwealth, dressed as an Amazon” (Code of Virginia § 7.1-26) and represents Virginia. The prostrate man represents tyranny, note the fallen crown to the right. The Tyrant is holding both a chain and a whip. The General Assembly of Virginia adopted an official salute to the flag of Virginia in 1954. 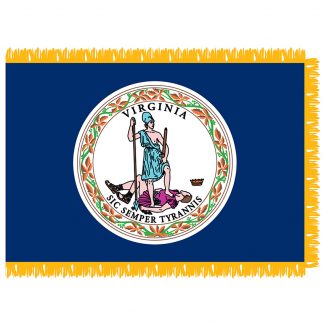