The flag of Tibet was introduced in 1912 by the 13th Dalai Lama, who united the army flags of various provinces to design the present one. Since then, it served as the all-Tibet military flag until 1950. It remains the emblem of the Central Tibetan Administration headquartered in Dharamsala, India. As a symbol of the Tibetan independence movement, it is banned in the People’s Republic of China, including the Tibet Autonomous Region which corresponds to the former area of control of the Tibetan government at Lhasa, as well as other areas in greater Tibet. 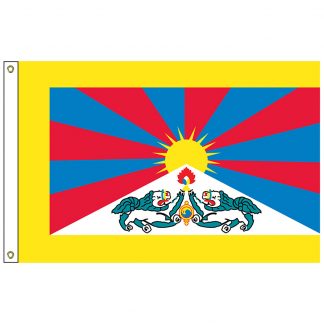