The flag of the State of New York is the state’s coat-of-arms on a blue background. It depicts two supporters: Left: Liberty, with the Revolutionary imagery of a Phrygian cap raised on a pole. Her left foot treads upon a crown that represents freedom from the England Monarchy. Right: blindfolded Justice, with scales and sword. The unheraldic nature of the Hudson River landscape reveals the modern origin of the coat-of-arms. The crest is an eagle surmounting a world globe. The two ships represent inland and foreign commerce, both of which are important for the state of New York. The motto Excelsior is derived from Latin, and means “Ever Upward.” The flag was adopted in 1901. 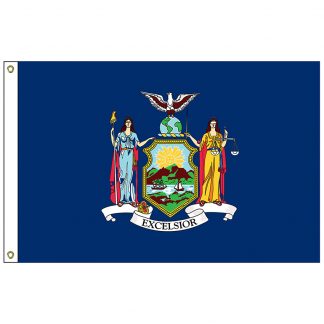