The Daughters of the American Revolution pushed New Mexico to design a contemporary and unique flag in 1920. A contest to design the new state flag was won by Dr. Harry Mera of Santa Fe, New Mexico. Mera was an archaeologist who was familiar with the Zia sun symbol found at Zia Pueblo on a 19th century pot. The symbol has sacred meaning to the Zia. Four is a sacred number which symbolizes the Circle of Life: four winds, four seasons, four directions, and four sacred obligations. The circle binds the four elements of four together. His winning design is the flag that the state uses today. In recent years, Zia Pueblo has made repeated attempts to remove the sacred symbol from the state’s flag. It is unclear what the ultimate result of this effort will be. For now, at least, the Zia will remain on the flag. 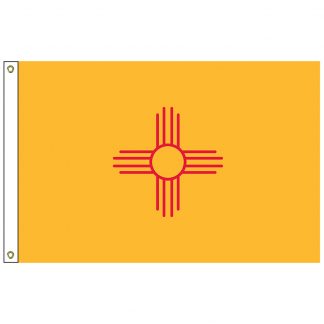