In 1921, a state flag design by a New York Architect was presented to the Legislature, but was turned down as being inappropriate. Nebraska was one of the last states to adopt a State Flag. Representative, J. Lloyd McMaster introduced a bill in 1925, designating a State Banner. The bill was passed and became statute. The law describes the banner as “a reproduction of the Great Seal of the State charged on the center in gold and silver on a field of national blue.” The 1963 Legislature designated the state banner the official flag of Nebraska. The 1965 Legislature amended Section 84-714 Revised Statutes of Nebraska to add “and may be displayed on such occasions, at such times, and under such conditions as the Flag of the United States of America. The State Flag shall be displayed on or near the State Capitol, the Governor’s Mansion, all Courthouses, City or Village Halls, Schoolhouses, and other public administrative buildings in the State under or to the left of the Flag of the United States of America.” The original State Flag is currently hanging in the Secretary of State’s office for the viewing pleasure of the public. 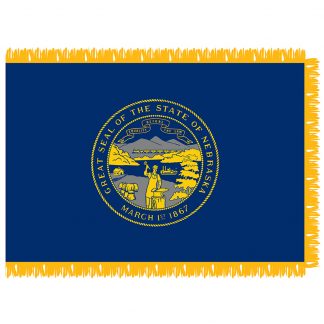