The flag of Paraguay (Spanish: bandera de Paraguay) is unique among national flags in having different emblems on its obverse and reverse sides. Each side of the flag consists of three equal, horizontal bands: red, white, and blue, with an emblem centered in the white band. The emblem on obverse side is the national coat of arms of Paraguay: a yellow five-pointed star surrounded by a green wreath capped by the words REPUBLICA DEL PARAGUAY (“Republic of Paraguay”), all within two concentric circles); the emblem on the reverse side is the seal of the treasury (a yellow lion below a red liberty cap and the words Paz y Justicia (“Peace and Justice”) capped by REPUBLICA DEL PARAGUAY, again within two circles. The designed of the flag was simplified in 1991. 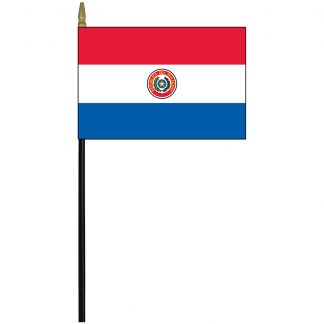