Nylon outdoor Philadelphia Light Horse flag. Expertly crafted using heavyweight bunting material of 100% acid-dyed nylon. All seams are double-stitched and fly ends have 4 rows of stitching for added durability. Finished with heavy-duty, no shrink white header material for the strongest headers in the industry. These nylon flags offer lustrous beauty, superior wear plus excellent fly-ability even in the slightest breeze.

This troop was formed by a group of Philadelphia gentlemen on November 17, 1774. Thirteen stripes in the canton represent the united colonies. It was this troop that escorted General Washington from Philadelphia to take command of the Continental Army in June of 1775. The Light Horse Troop later carried their flag in the Battles of Brandywine, Germantown, Princeton and Trenton. 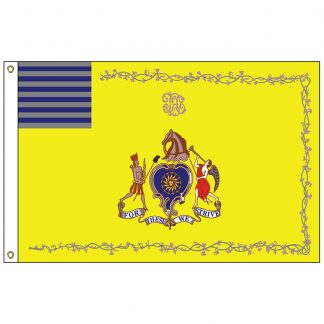