Nylon outdoor Pine Tree flag. Expertly crafted using heavyweight bunting material of 100% acid-dyed nylon. All seams are double-stitched and fly ends have 4 rows of stitching for added durability. Finished with heavy-duty, no shrink white header material for the strongest headers in the industry. These nylon flags offer lustrous beauty, superior wear plus excellent fly-ability even in the slightest breeze.

This flag was in use 1775-1777. It was officially adopted by the Massachusetts Navy in April 1776. It flew over the floating batteries which sailed down the Charles River to attack British-held Boston. This flag is the jack form of the “Bunker Hill” flag. On October 20, 1775, Colonel Joseph Reed, Washington’s military secretary, recommended that this flag be put into general usage so that American ships could recognize one another. The “Pine Tree Flag” is a generic name for a number of flags used by Massachusetts and by New England from 1686 to 1776. 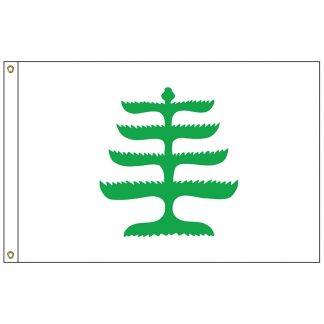