Nylon outdoor Grand Union flag. Expertly crafted using heavyweight bunting material of 100% acid-dyed nylon. All seams are double-stitched and fly ends have 4 rows of stitching for added durability. Finished with heavy-duty, no shrink white header material for the strongest headers in the industry. These nylon flags offer lustrous beauty, superior wear plus excellent fly-ability even in the slightest breeze.

This flag was never officially sanctioned by the Continental Congress but is considered the first flag of the United States and was in use from late 1775 until mid 1777. This flag was an alteration of the British Meteor flag. In its blue canton was the red cross of ST. George and the white cross of ST. Andrew. The thirteen stripes signified the original colonies. Retaining the British Union in the canton indicated a continued loyalty, as the Americans saw it, to the constitutional government against which they fought. On January 1,1776, this flag was first raised on Prospect Hill (then called MT. Pisgah), in Somerville, Massachusetts. At this time the Continental army came into formal existence. At the time it was known as the continental colors because it represented the entire nation. In one of Washington’s letters he referred to it as the “Great Union Flag” and it is most commonly called the Grand Union today. 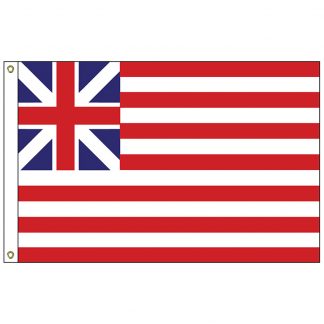