Nylon outdoor Alamo flag. Expertly crafted using heavyweight bunting material of 100% acid-dyed nylon. All seams are double-stitched and fly ends have 4 rows of stitching for added durability. Finished with heavy-duty, no shrink white header material for the strongest headers in the industry. These nylon flags offer lustrous beauty, superior wear plus excellent fly-ability even in the slightest breeze.

On March 6, 1836, the Mexican army under General Santa Anna breached the walls of the Alamo at San Antonio, Texas, after thirteen days of continuous assaults. Jim Bowie, Davey Crockett, and William Travis were among the 187 defenders who died that morning. All were avenged six weeks later when Sam Houston, with the cry “Remember the Alamo,” defeated Santa Anna and established the independence of the Texas Republic. This flag was used from 1824 until the 1830’s. 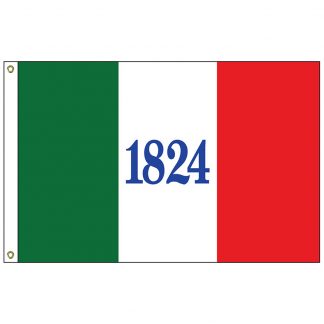