The Seneca are a group of indigenous people native to North America. They were the nation located farthest to the west within the Six Nations or Iroquois League in New York before the American Revolution. While exact population figures are unknown, approximately 15,000 to 25,000 Seneca live in Canada, near Brantford, Ontario, at the Six Nations of the Grand River First Nation. They are descendants of Seneca who resettled there, as they had been allies of the British during the American Revolution. Nearly 30,000 Seneca live in the United States, on and off reservations around Buffalo, New York and in Oklahoma.
All of these flags are digitally printed knitted polyester. Made to order item. Lead time approximately 10 business days. 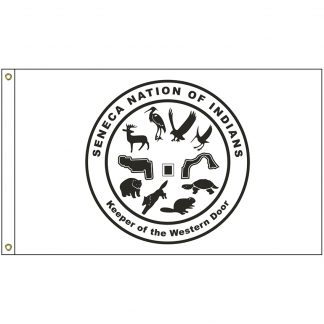