Flag of the former Kingdom of Yugoslavia consisted of three equal horizontal bands colored in pan-Slavic colors – blue (top), white and red – with coat of arms in the center. The flag was in official use from 1922 until the Kingdom of Yugoslavia dissolved after surrendering to the Axis powers in 1941. After this point, the flag was kept in use by the various Chetnik groups of the Second World War (also known as the Yugoslav Army in the Fatherland). 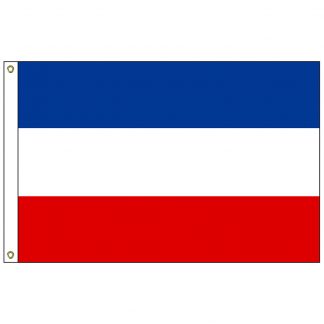