The flag of Wyoming consists of the silhouette of an American Bison in white and facing the hoist on a blue field, bordered in white and red. The seal of Wyoming appears branded on the bison’s ribs. The current flag was adopted January 31, 1917 after a design competition. The bison (commonly called “buffalo” in the U.S.) refers to the state’s nickname, the buffalo state. 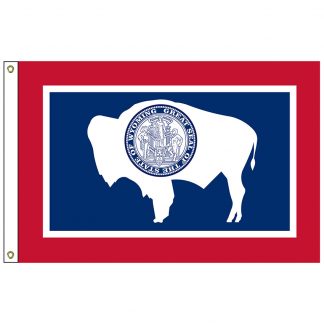