The flag of West Virginia consists of the State’s coat of arms on a pure white field with a dark blue border. The coat of arms, primarily consisting of the State seal, is featured in the flag’s center. The coat of arms symbolizes the State’s principle pursuits and resources. The obverse side of the seal bears the legend State of West Virginia together with the State motto, Montani Semper Liberi (Mountaineers are Always Free). A farmer stands to the left and miner to the right of a large ivy draped rock bearing the date of the State’s admission to the Union, June 20, 1863. In front of the rock lay two rifles upon which rests a red Phrygian cap, or cap of liberty. The lower half of the coat of arms is wreathed by the rhododendron, the State flower. The current flag was adopted by the West Virginia legislature on 7 March 1929. 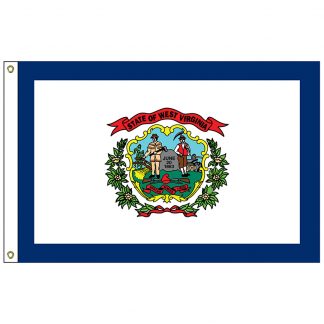