The Flag of Vermont consists of the State Coat-of-Arms upon a field of azure. Below the escutcheon is a red ribbon with the state name “Vermont” and the state motto “Freedom and Unity.” The motto is central to the Vermont ideal of balancing personal freedom with the individual’s responsibility to their community. The current flag was adopted by the General Assembly of the State of Vermont on 1 June 1923. A flag of similar design, but handpainted on silk satin, was used as the Governor’s Flag during the Vermont Republic (1777–1791). Another similar flag can be seen at the Vermont State House in the Old Supreme Court Chamber, now used as an assembly members’ reading room. Because the format is similar to many other state flags, especially Maine, Pennsylvania, New York, and Michigan, some have called for adopting the flag of the Vermont Republic (the original Green Mountain Boys infantry standard) or an altogether new design. 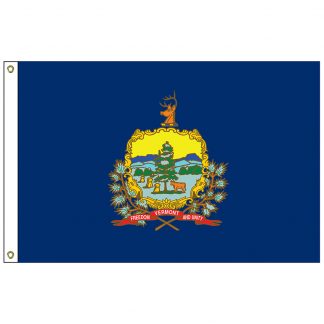