The flag of Uzbekistan consists of three horizontal blue, white and green bands separated by two thin red fimbriations, with a crescent moon and twelve stars at the canton. Adopted in 1991 to replace the flag of the Uzbek Soviet Socialist Republic (SSR), it has been the flag of the Republic of Uzbekistan since the country gained independence in that same year. The sky-blue color on the flag is a symbol of blue sky and clear water. Azure is revered in the East. Blue is also the color of the Turkic peoples. The majority of the population of Uzbekistan are Turkic peoples who speak Turkic languages. White is a symbol of peace, purity, and kindness. White also means the ancient religion of Zoroastrianism, which was dominant in the territory of this country before the arrival of Islam. Green is a symbol of the diverse and rich nature of the country. Green is also one of the colors of the Holy religion Islam, which is practiced by the majority of the population of Uzbekistan. The red stripes are vital forces pulsating in every living creature, a symbol of life, courage, as well as a symbol of national and religious minorities of Uzbekistan. The Crescent corresponds to the centuries-old tradition of the people of Uzbekistan and is also one of the main symbols of Islam. The Crescent moon and stars are also considered a symbol of a cloudless calm sky and peace. The flag of Uzbekistan has 12 stars. The number 12 means 12 zodiac signs, 12 months of the year, and is also considered a symbol of perfection. in Islam, the number 12 is also important, as in 12 years according to Islam, boys become adults. 12 also means the 12 imams. 12 stars on the flag are arranged in such a way that visually they form the inscription Allah in Arabic. 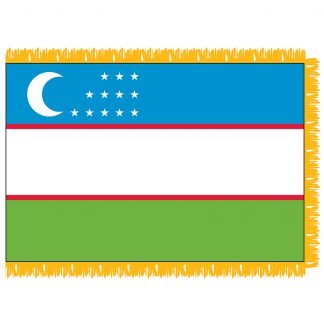