The flag of Turkmenistan features a white crescent (symbol of Islam) and five stars representing the five regions of the country. Placed upon a green field is a symbolic representation of the country’s famous carpet industry. It was introduced as the flag of Turkmenistan on September 27, 1992 to replace the Soviet-era flag which consisted of a red background with two light blue bars in the middle. The modified version with a 2:3 ratio was adopted on January 24, 2001. 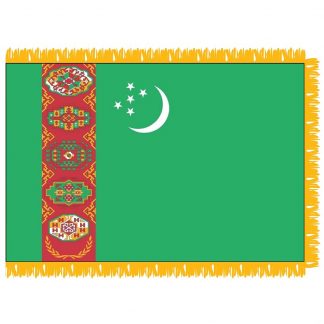