The flag of Togo was adopted on April 27, 1960. It has five equal horizontal bands of green (top and bottom) alternating with yellow. There is a white five-pointed star on a red square in the upper hoist-side corner. It uses the popular pan-African colors of Ethiopia, but the design resembles the flag of Liberia which itself echoes the flag of the United States. The flag was designed by Mr. Ahyi Paul and approximates a golden rectangle closely. 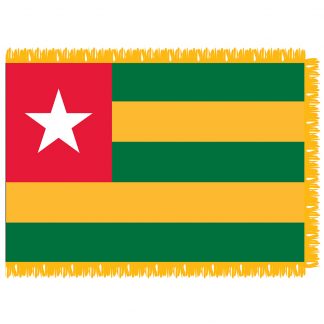