This beautiful Historical American flag is constructed out of nylon for lasting durability and outdoor use. Makes an excellent decoration for holidays, political campaigns, and historical landmarks. Features printed white stars and red and white stripes for a striking display of patriotic pride.

On September 14,1818, U.S. soldiers at Baltimore’s Fort McHenry raised a huge American flag to celebrate a crucial victory over British forces during the War of 1812. The sight of those “broad stripes and bright stars” inspired Francis Scott Key to write a song that eventually became the United States national anthem. Key’s words gave new significance to a national symbol and started a tradition through which generations of Americans have invested the flag with their own meanings and memories. 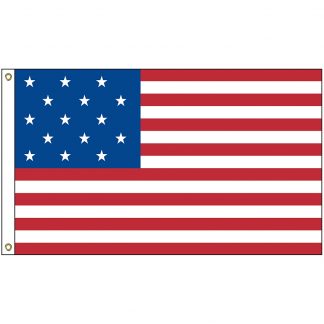