Our beautiful handheld “stick” flags are made up of a high quality rayon state flag mounted on a 10″ black plastic stick with a gold spear tip.
All flags are 4″x6″, bases are sold separately.

The flag of Indiana consists of a gold torch representing liberty and enlightenment; the rays represent their far-reaching influence. The stars represent Indiana’s place as the 19th state to join the United States – 13 stars in the outer loop for the original 13 colonies, 5 inside them for the next five states, and one large star above the torch for Indiana. The flag was adopted by the Indiana General Assembly in 1917, as part of the commemoration of the state’s 1916 Centennial celebration; it was the winner of a contest sponsored by the Daughters of the American Revolution. The design was created by Paul Hadley of Mooresville, Indiana. 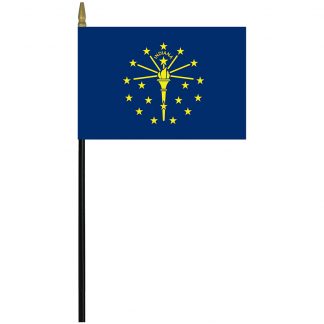