The flag of San Francisco, California depicts a rising phoenix, often assumed to be symbol of the city’s recovery from the 1906 Earthquake and fire, but it dates several years earlier to about 1900. San Francisco suffered several devastating fires, including six fires between 1849 and 1852 (the last destroying almost the entire city), along with two earthquakes. Every time the city, just like the mythological bird, “rose from the ashes” and was rebuilt in even grander style and size. Below the phoenix is a banner which reads in Spanish: “Oro en Paz—Fierro en Guerra”, which translates into: “Gold in Peace, Iron in War”. Because of this the official City colors are Gold and Black. 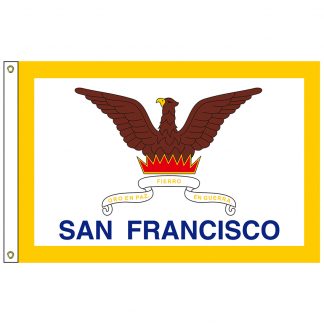