The flag of Pennsylvania consists of a blue field on which is embroidered the state coat of arms surrounded by draft horses on both sides, and a bald eagle, which represents the new nation, above. The state coat of arms includes a ship under full sail, a plow, and three sheaves of wheat indicating the significance of commerce, labor, perseverance and agriculture to the state. Surrounding the coat of arms is a stalk of Native American corn on the left and an olive branch on the right. These represent the state’s recognition of its past and its hope for the future. The scroll below the coat of arms reads: “Virtue, Liberty and Independence,” which is the state’s motto. 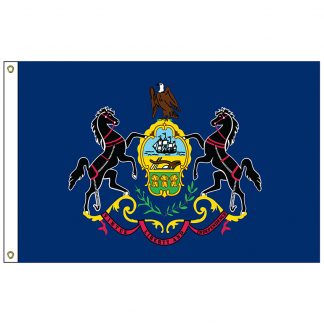