The flag of Oklahoma consists of a traditional Osage Nation buffalo-skin shield with seven eagle feathers on a sky blue field. The Osage shield is covered by two symbols of peace: the peace pipe or calumet representing Native Americans, and the olive branch representing whites. Six golden brown crosses, Native American symbols for stars, are spaced on the shield. The blue field represents the first official flag flown by any Native American Nation, the Choctaw flag of the American Civil War. 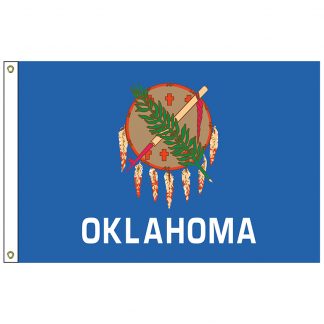