The flag of the Organization of American States is one of the official symbols of the Organization of American States (OAS), and consists of the OAS’ emblem defacing a light blue field. It was adopted in 1965 and has been amended several times as new members have joined the OAS. The design consists of a rectangle of blue background with a white circle, bordered in gold, in its center. On the inside of this circle is the organization shell consisting of a grouping of flags of all member states, which are currently 35, hoisted on golden masts. The order of the flags is given in Spanish alphabetical order, starting with Antigua and Barbuda in the lower left, following clockwise until Venezuela in the lower right. 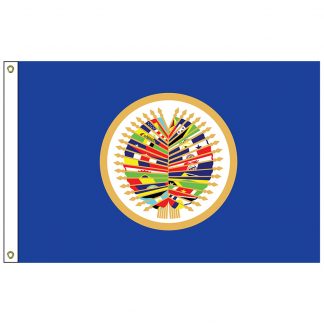