The state legislature adopted this flag in March, 1885, to replace the original state flag that had been adopted on June 22, 1861, immediately following the state’s secession from the Union on May 20, 1861. The red field of the old flag was replaced by blue in memory of the Bonnie Blue Flag which was used as a symbol of secession during the war. It bears the dates of the Mecklenburg Declaration of Independence (May 20, 1775) and of the Halifax Resolves (April 12, 1776), documents that place North Carolina at the forefront of the American independence movement. Both dates also appear on the Great Seal of North Carolina. 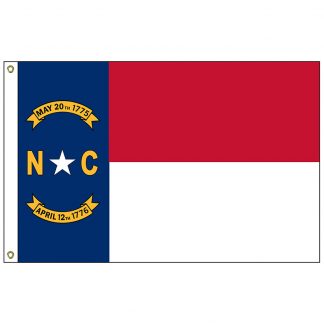