The flag of Nevada consists of a blue field with a star in the upper left hand corner, surrounded by the state name “Nevada.” Above this is a ribbon with the words “Battle Born,” indicating that Nevada became a state during the American Civil War. Below the star are two sprigs of green sagebrush (the state flower) with yellow flowers. The current flag had its origin in a design contest announced in 1926. The winning design, by Louis Shellback III, was subjected to some revision in the state legislature, where there was disagreement between the two houses over the placement of the word “Nevada” on the flag. A compromise was reached, and in 1929 Governor Fred B. Balzar signed into law a bill adopting the new flag. In 1989, however, a legislative researcher discovered that the bill as sent to and signed by the Governor did not accurately reflect the 1929 legislative agreement. A law enacted in 1991 directed that the word “Nevada” appear below the star and above the sagebrush sprays, thus producing the design now in use. 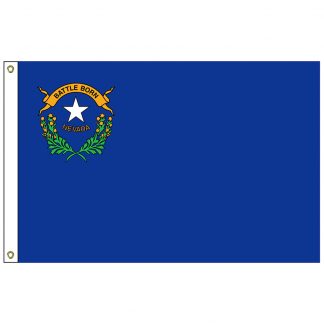