The Apalachee are a Native American people who historically lived in the Florida Panhandle, and now live primarily in the U.S. state of Louisiana. Their historical territory was known to the Spanish colonists as the Apalachee Province. The Apalachee occupied the site of Velda Mound starting about 1450 CE, but had mostly abandoned it before the Spanish started settlements in the 17th century. They first encountered Spanish explorers in the 16th century, when the Hernando de Soto expedition arrived. They lived between the Aucilla River and Ochlockonee River, at the head of Apalachee Bay. The Apalachee spoke a Muskogean language, now extinct. All of these flags are digitally printed knitted polyester. Made to order item. Lead time approximately 10 business days. 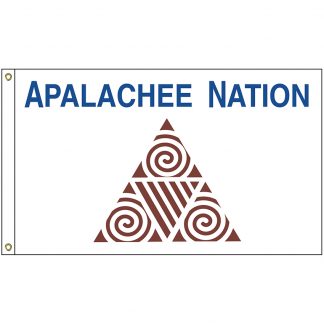