The Cocopah Indian Tribe, known as the River People, have lived along the lower Colorado River and delta for centuries, maintaining their traditional and cultural beliefs throughout many political and environmental changes. Descended from the greater Yuman-speaking people who occupied lands along the Colorado River, the Cocopah had no written language, however, historical records have been passed on orally and by outside visitors. 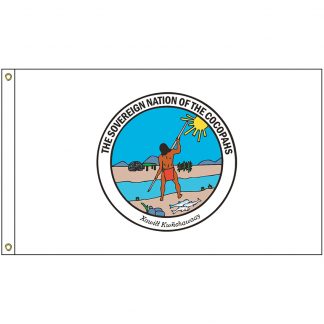 You're viewing: NAT-2×3-COCO 2′ x 3′ Sovereign Nation of the Cocopahs Flag With Heading and Grommets $79.90
Add to cart
Scroll Up