The flag of Qatar has a proportion of 11:28. It is maroon with a broad white serrated band (nine white points) on the hoist side. The Meaning of Qatar’s flag is: A- The white color reflects the internationally recognized symbol of peace. B- The maroon color symbolizes the bloodshed during the several wars Qatar had undergone, particularly in the second half of the 19th century. C- The nine-point serrated line indicates that Qatar is the 9th member of the “reconciled Emirates” of the Persian Gulf in the wake of concluding the Qatari-British treaty in 1916. 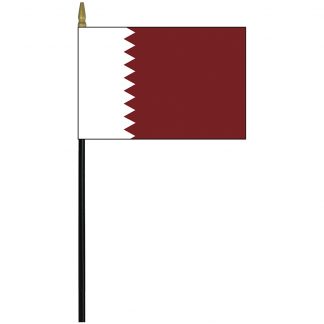