The flag of Myanmar was adopted on January 3, 1974 upon the declaration of a socialist republic in Burma by Ne Win. The new flag design was not radically different from the previous flag of Myanmar (then called Burma) in that both featured a red field with a blue canton in the upper corner on the hoist side. However, the imagery within the canton was changed to a cog wheel with a bushel of rice superimposed upon it. These socialist symbols stand for the workers and farmers. Surrounding this are 14 five-pointed stars that represent the administrative divisions of Myanmar. The white color symbolizes purity, the blue symbolizes peace and integrity, and the red symbolizes courage. 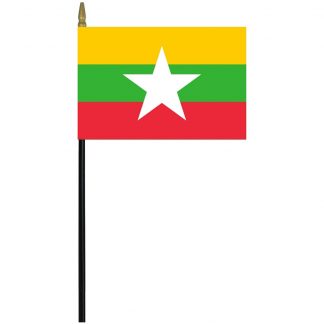