The flag of Marshall Islands was officially adopted on May 1, 1979. The islands, long a part of the U.S. Trust Territory of the Pacific Islands, gained their independence in 1979, and hoisted this striking flag. The orange and white stripes are symbolic of the two side-by-side island chains within the Marshalls, the Rotok and Ralik. The blue field represents the surrounding Pacific Ocean, and the white star has a point for each district – 24 in all. 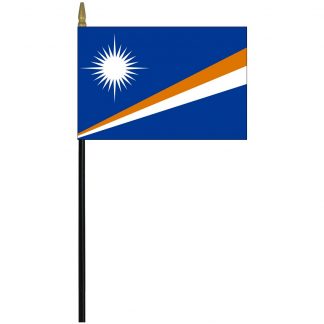