Our beautiful handheld “stick” flags are made up of a high quality rayon state flag mounted on a 10″ black plastic stick with a gold spear tip.
All flags are 4″x6″, bases are sold separately.

In July 1917, Roy Smith, the Naval Governor of Guam at the current time, approved the design of the Guam flag which was designed by Mrs. Helen L. Paul. That same year the flag was officially adopted and the Guam flag would be flown together with the American flag wherever the American flag was located on the island of Guam. The design of the Guam flag consisted of a rectangular field of deep blue color with a red border, and having at its center the Guam coat of arms which was oval-shaped and consisted of a proa, or sailing canoe, a palm tree, and the cliff line of Two Lover’s Point in the background. 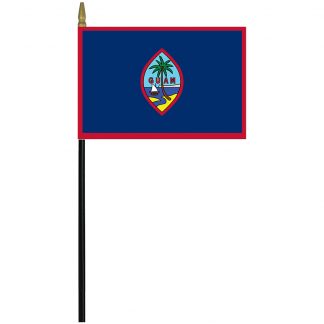