The national flag of the Central African Republic was officially adopted in 1958. It has been retained since that time with the same design, four horizontal stripes of blue, white, green and yellow, and a single vertical band of red, with a yellow five-pointed star in the upper left corner. The colors chosen are intended to be symbolic of France (blue and white) and Africa (green and yellow) with the red vertical stripe connecting them both in unity, and the respect that Europeans and Africans should have for each other. The yellow star is intended to be indicative of independence. 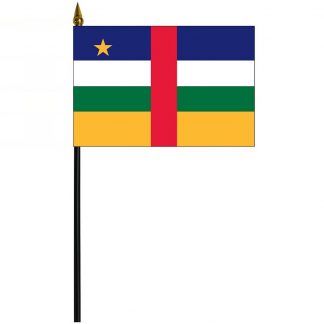