The national flag of Barbados was officially adopted on November 30, 1966, the island’s first Independence Day. It consists of a triband of two bands of ultramarine, which are said to stand for the ocean surrounding the country and the sky, separated by a golden middle band, which represents the sand of the island’s beaches. A black trident head, commonly called the broken trident, is centered in the golden band, and the fact that the staff is missing is significant. The trident symbol was taken from Barbados’ colonial badge, where the trident of Poseidon is shown with Britannia holding it. The broken lower part symbolizes a symbolic break from its status as a colony. The three points of the trident represent the three principles of democracy: 1) government of the people, 2) government for the people, and 3) government by the people. 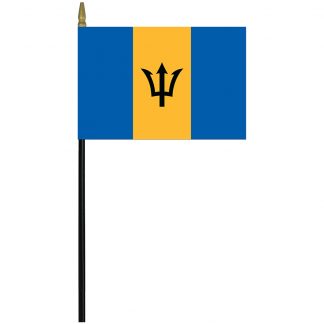