The flag of Missouri was designed and stitched in Jackson, Missouri, by Marie Elizabeth Watkins Oliver (1885-1959), the wife of former State Senator R.B. Oliver. Her design was adopted in 1913 and remains unchanged to this day. The flag consists of three horizontal stripes of red, white and blue. These represent valor, purity, vigilance, and justice. The colors also reflect the state’s historic status as part of the French Louisiana Territory. In the center white stripe is the Seal of Missouri, circled by a blue band containing 24 stars, symbolizing Missouri’s admission as the 24th U.S. state. 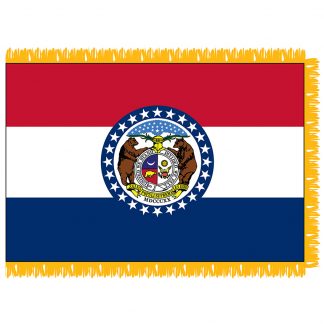