The flag of Minnesota consists of the state seal on a royal blue background with gold fringe. The seal is surrounded by a wreath of the state flower, the showy lady slipper. Three dates are woven into a wreath of the state flower: 1858, the statehood year; 1819, the year Fort Snelling was established; and 1893, the year the original flag was adopted. Nineteen stars ring the wreath, symbolizing the fact that Minnesota was the 19th state to enter the Union after the original 13. The largest star represents the North Star and Minnesota. The current flag was adopted in 1957 and the state seal in the flag was modified in 1983. 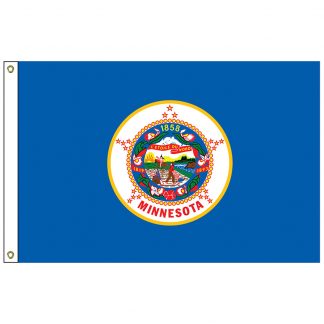