The flag of the U.S. state of Michigan depicts the state’s coat-of-arms on a dark blue field, as set forth by Michigan state law. The state coat of arms depicts a light blue shield, upon which the sun rises over a lake and peninsula, and a man with raised hand and holding a long gun representing peace and the ability to defend his rights. The elk and moose depict great animals of Michigan, while the bald eagle represents the United States. The present flag, adopted in 1911, was the third state flag. The first flag featured a portrait of Michigan’s first governor, Stevens T. Mason, on one side and the state coat of arms and “a soldier and a lady” on the other side. The second flag, adopted in 1865, displayed the state coat of arms on one side and the United States coat of arms on the other side. 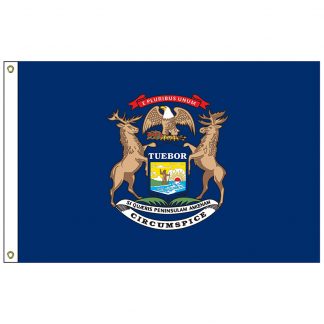