The flag of Massachusetts displays, on both sides, the state coat of arms centered on a white field. The shield depicts an Algonquin Native American with bow and arrow; the arrow is pointed downward, signifying peace. A white star with five points appears next to the figure’s head, signifying Massachusetts’ admission as the 6th US State. A blue ribbon (blue, signifying the Blue Hills of Canton and Milton) surrounds the shield, bearing the state motto Ense Petit Placidam, Sub Libertate Quietem (“By the sword we seek peace, but peace only under liberty”). Above the shield is the state military crest: a bent arm holding a broadsword aloft. The sword has its blade up, to remind that it was through the American Revolution that independence was won. The state flag was made official in 1908, but had been used unofficially since the American Revolution. This flag included on its reverse the blue shield from the coat of arms containing only a green pine tree, which had been the design of the state naval ensign ever since the Revolutionary War. 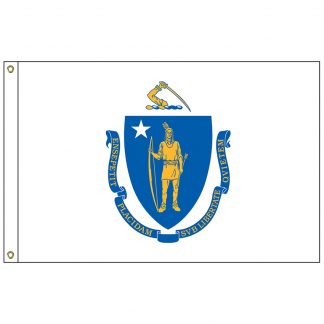 You're viewing: SF-103-MASSACHUSETTS Massachusetts 3′ x 5′ Nylon Flag with Heading and Grommets $21.50
Add to cart
Scroll Up