The official flag is scarlet with the Corps emblem in gray and gold. It was adopted on January 18, 1939, although Marine Corps Order 4 had established scarlet and gold and the official colors of the Corps as early as 1925. The indoor/parade version is bordered by a gold fringe while the outdoor version is plain. It measures 55 inches (140cm) on the hoist and 62 inches (160cm)  on the fly. In addition to the multi-colored battle streamers (measuring 3 feet (.91m) by 2 3/4 inches (7cm) wide) affixed to the top of the staff, the staff itself is covered with sterling silver bands engraved with the names of conflicts in which the Corps has been engaged.

Our economy polyester 3′ x 5′ Marine Corps flags are finished with a white canvas heading and brass grommets are designed to be flown outdoors for short periods of time or hung up indoors. 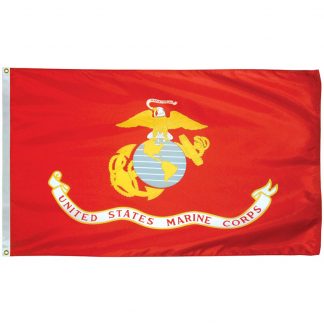