The flag of Louisiana consists of a heraldic charge called a “pelican in her piety,” representing a mother pelican wounding her breast to feed her young from the blood. This symbol, emblematic of Christian charity (and also the official state bird, the Brown Pelican), is also found on the state seal. On the flag it is depicted above a ribbon with the state motto: “Union, Justice, and Confidence.” The current flag was adopted in 2006, revising the original pelican design of 1912. 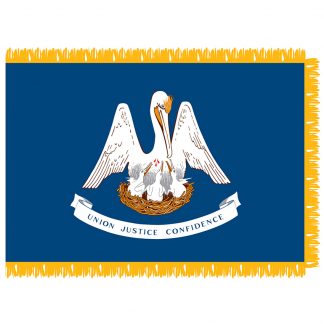