The Liberian flag bears close resemblance to the flag of the United States, showing the ex–American slave origins of the country. The Liberian flag has similar red and white stripes, as well as a blue square with a white star in the corner. The eleven stripes symbolize the signatories of the Liberian Declaration of Independence, red and white symbolizing courage and moral excellence. The white star represents the freedom the ex-slaves were given, above the blue square representing the African mainland. The flag is seen on many ships around the world as Liberia offers registration under its flag. Shipping companies do this to avoid taxes and restrictions that other countries enforce. 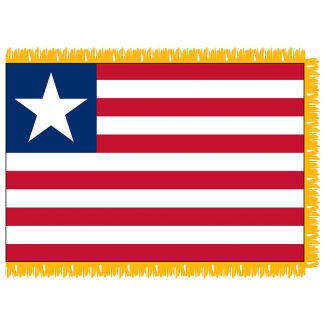